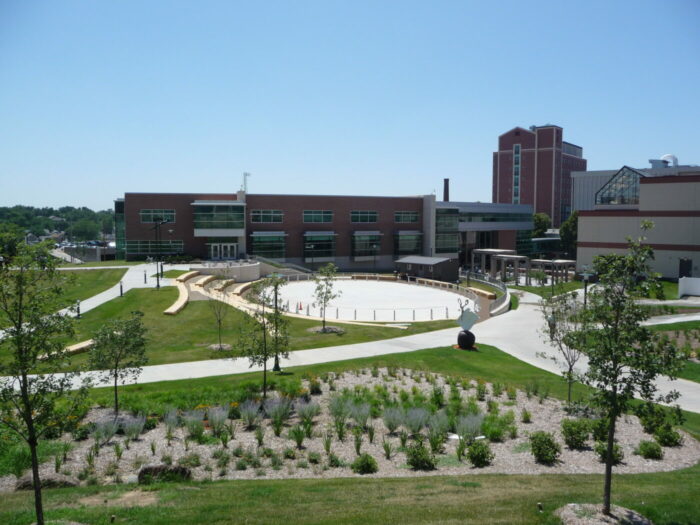 For the second year in a row, the Med Center received a “Free Trees for Fall Planting” grant from a collaborative effort from the Nebraska Forest Service (NFS) and Nebraska Statewide Arboretum (NSA). This year we received three oak trees, one elm tree, and one tulip tree and all were planted the day after we received them.  They replaced trees that died or were damaged, and 2 were used in areas that will have trees die off later, at which time the ‘new’ trees will be established and ready to take their place.

This effort from the NFS and NSA set out to plant at least 500 trees within Nebraska this fall in areas that are of civic importance or have a high need for trees. In LiveGreen’s “Health and Urban Trees” article we noted that urban trees provide a canopy that help cool down urban areas.  Trees provide numerous environmental benefits including storm-water runoff capture, carbon storage and sequestration, and reducing energy use, all of which positively impacts human health.  To that end, the Nature Conservancy and the National Institute of Health began a study in 2017 in Louisville, Kentucky focusing on how nature can better improve human health in urban areas. Planting trees in urban areas and in neighborhoods is not only to beautify the area but provides a valuable, almost priceless, physical and mental health benefit to the community and continuing to plant trees can spur job creation, decrease air pollution, mitigate climate change, and give communities a safer space to live, work, and play.

This grant for businesses and other community organizations exists because fall is actually the best time to plant trees. According to the University of Nebraska Extension office of Community Environment, the soil is warm which encourages new root formation, the air temperatures are below the 90-100 degree summer average temperatures which encourages trees to produce shoots, and on average more moisture would occur than in the spring. According to Bob Henrickson at the NSA, “Plants are less stressed by the heat (in the fall), more likely to develop a strong root system and gardeners will be way ahead of the game next spring.” Fall is also usually the time where garden centers have trees and plants on sale, making fall a great time for you to plant too.

Category: Actions You Can Take, At Home, Education, New Post, On Campus