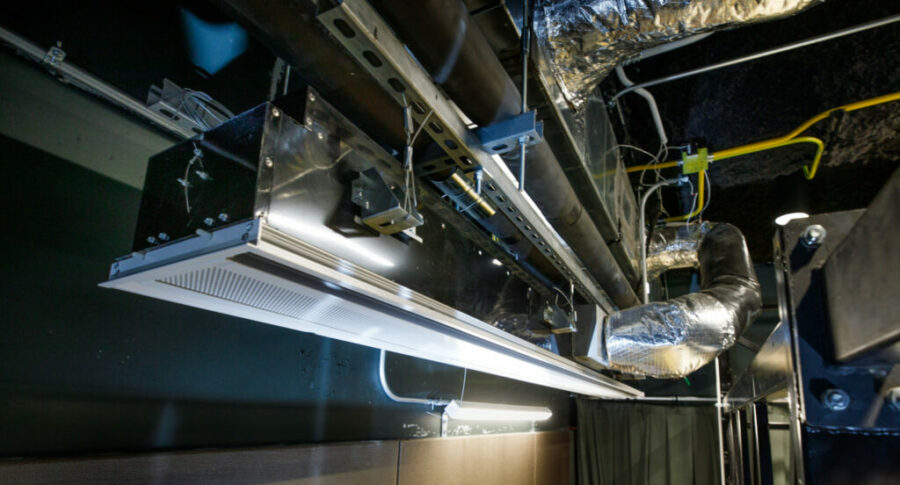 Earlier this summer we told you about some exciting energy technology that went into the Dr. Edwin G. & Dorothy Balbach Davis Global Center, but we couldn’t fit it into one article, so here’s the second installment.

In 1975, chilled beam technology was first developed in Norway as a more efficient method of temperature control.  Starting in the ‘90s, chilled beams could be found over much of Europe and, more recently, in the United States, and these systems have been used successfully in patient rooms since 2013.  Now, UNMC/Nebraska Medicine has joined the ranks of institutions such as Harvard, Clemson, and the University of California, Davis Health & Wellness Center taking advantage of this technology’s benefits.

Chilled beams were used in the Davis Global Center as an energy-efficient way to provide temperature and humidity control, but with significantly less forced (blown) air than a conventional building. This technology uses a combination of a small amount of air, coupled with a chilled water coil, to maintain a comfortable environment. A unit above the ceiling dries out the air before it passes over the chilled beams – an important step to avoid condensation.  Water coils mounted on the ceiling are chilled, cooling the air around them.  The cooled air falls and warmer air rises to make contact with the chilled water coils.  Because chilled beams use less forced air, the building and its occupants are able realize the benefits of less noise, no drafts, and higher ceilings in many spaces.

In addition to those benefits, by not having to power fans to force air into spaces, we use less energy (up to 25%) to create the same amount of cooling, and that means cost savings/avoidance and less emissions as well.   The Med Center has a net zero building emissions goal to reach by 2030, so increasing efficiency and emitting less is a must.  It’s our mission to create a healthy future for all, and that means reducing emissions—which are leading contributors to numerous health issues including,  but not limited to, lung ailments, cancer, and fertility issues, not to mention causing climate change.