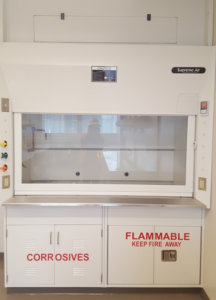 A fume hood sash is the see-through panel that moves up and down to allow access into the fume hood.  Air is being pulled from the lab, into the fume hood, and out of the building in order to keep noxious fumes out of labs and researchers safe.  While this function is vital, it also uses A LOT of energy!  It’s essentially a 5-foot wide, 3-foot tall window that’s always open with a fan blowing the conditioned (heated, cooled, humidified) air right out….and the Durham Research Center has over 50 of them!  Imagine trying to heat or cool your home with all the windows open and fans blowing to the outside!?!  This simple action of closing the fume hoods when not in use allows the air being pulled out of the lab to be reduced, which results in significant energy savings.  How significant?  The two Durham research towers currently consume more than $3 million a year in energy costs. By shutting fume hood sashes and allowing the airflow to be reduced (especially during unoccupied times), the med center will save an estimated $1,000,000 annually in “wasted” energy (that’s about 1/3 of the total energy, and that’s just from when they aren’t in use!)!

Whenever you are done using a fume hood or stepping away for a while, please “Shut the Sash”.

Yes.  Even when the sash is shut, air is still being pulled through the fume hood to make sure the fumes leave the building.  Shutting the sash reduces the amount of air, but never below a safe level.

How will air be pulled through the fume hood if the sash is shut?

Air can be pulled through next to the bottom of the sash, as there are ‘feet’ that leave a gap between the sash and the stainless steel ledge.  There is also a gap under that ledge that is designed for this.

My fume hood alarms when it’s open and nobody is there, is that normal?

Yes.  Many fume hoods were fitted with motion sensors and alarms.  If nobody is working in the hood (activating the motion sensor) the fume hood will alarm to let you know you need to shut the sash.  Take the simple step to shut the sash when you are done so you don’t have to hear the alarms.  Your  late and weekend-working neighbors will appreciate it!

Does this help in any way other than saving money?

Yes!  The electricity that’s not being used comes from burning coal, which is a dirty process and increases pollution.  By using less energy the environment is cleaner as is the air you breath.  That’s better for your health and especially those with lung diseases. 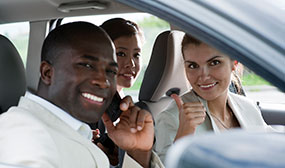