The med center will hold a tree planting event on Thursday, Oct. 6, from 10 a.m. to 11 a.m. at the northwest corner of 41st and Harney streets, and the campus community is invited.

Children from the UNMC Child Development Center will join the event as new pawpaw trees are planted. Attendees will learn about the pawpaw and can talk to a certified arborist, and kids who attend will participate in a fun activity.

Pawpaws have served an important role in U.S. history. They were first harvested by Indigenous communities and later introduced to European settlers, and they are included in works of literature by such writers as Walt Whitman and William Falkner.

Pawpaw trees are relatively short, only around 20 feet tall on average, with large green leaves and a potato-sized green-yellow fruit. Although pawpaw fruit is increasingly popular among fruit lovers, it has a short shelf life, so it is unlikely to be at a local grocery store. Many have described the fruit as a mix between banana, mango and vanilla custard, but others find it bitter and unappetizing.

Pawpaws quickly propagate through their root system, with a mature tree sending up dozens of shoots in a single season. Despite their numbers, pawpaw trees from the same root system are unlikely to cross pollinate, requiring trees from two different plantings to pollinate for the trees to grow their distinctive fruit.  Pawpaws are pollinated by carrion flies and beetles, not bees, leading some pawpaw farmers to go so far as to hang roadkill in their trees to attract pollinators.

Although the tree has been around for centuries, little is known about the health impacts or benefits of pawpaws. Renewed interest in this native fruit has gained attention by researchers, who are now exploring if the fruit has any cancer-fighting properties.

Tom Payne, a certified arborist with UNMC, said adding pawpaw trees to campus is important for campus tree planning. Tree diversity strengthens the campus tree canopy, and the pawpaws will be the first on the UNMC and Nebraska Medicine campus.

Having a healthy campus tree canopy can help reduce the temperature on campus by breaking up urban “heat islands,” and act as a carbon sink and clean the air. Having access to natural environments can also help support psychological well-being. 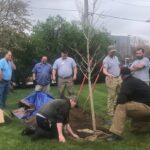