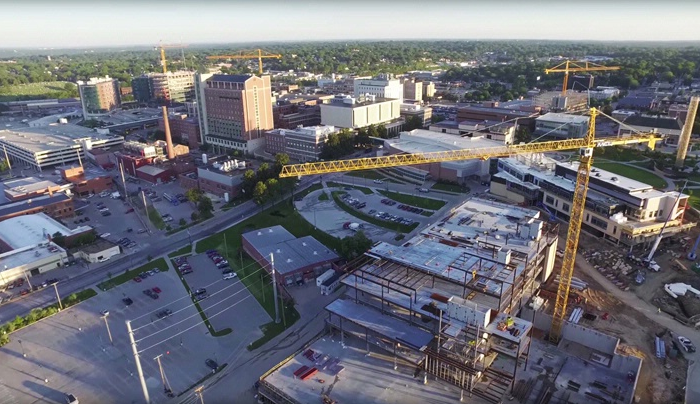 Imagine cutting 25 percent energy consumption from your home. It’s a tall order for a residence, but even more so when your “home” spans more than 100 acres.

That’s why UNMC and Nebraska Medicine are proud of having reached its lofty energy reduction goals, as outlined in the Sustainability Master Plan.

The medical center’s main campus at 42nd and Emile streets used 25 percent less energy in 2015 than it did five years ago, despite adding more square footage to campus.

“I’ve always said that academic health science centers should be leading the way in energy conservation,” said UNMC Chancellor Jeffrey P. Gold, M.D. “We’re especially proud of meeting this energy reduction goal. Not only does it show strong stewardship of taxpayer dollars, it also has a positive effect on the planet, people and ultimately everyone’s health.”

UNMC and Nebraska Medicine strategically reached its goal through a series of actions including:

Over the past five years, the medical center also reduced its peak electrical use, down 28 percent from 2010. Peak electricity use is the maximum amount of electricity needed at any given time. Reducing peak electricity ensures there is enough electricity for everybody on hot and humid days and helps to keep our costs lower.

These combined efforts have resulted in a 20 percent decrease in greenhouse gas emissions and has a measurable, positive effect on the health of our community, specifically air quality. And, that’s good news to anyone who has or knows someone with asthma, chronic obstructive pulmonary disease or chronic bronchitis.

It also conservatively equates to more than $10 million in money the medical center would have had to spend on utilities.

What others are saying

“UNMC has been a regional leader in energy efficiency and demand reduction as evidenced by their 25.6 percent energy reduction over the past five years. These kinds of reductions and initiatives do not come by accident. They are part of a strategic focus and great examples of how to be great stewards of our resources in Nebraska.”
-OPPD CEO Tim Burke

“We commend UNMC and Nebraska Medicine on their leadership for implementing sustainable solutions in our community. We understand the importance of improving efficiencies and lowering emissions in our homes, industries and hospitals. UNMC has made tremendous strides in the past five years.”
-MUD President Scott Keep