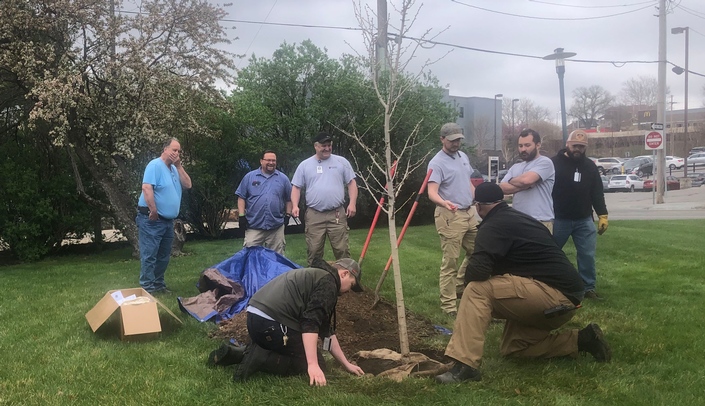 The med center held a variety of events this year to commemorate Earth Month.

All month, med center team members participated in the online Drawdown Ecochallenge, where they earned points for individual actions. As a team, colleagues consumed 21 meatless or vegan meals, saved 116 pounds of carbon dioxide and conserved 780 gallons of water.

On April 6, local organizations including Hillside Solutions, City Sprouts, MAPA, Metro transit, Omaha Permaculture and OPPD came together to talk about their programs and how higher education students across the Omaha area can take action and get involved.

Then on April 12, presenters Peter Pellerito from the UNMC Center for Healthy Living and Lauren Monroe-Neal of Prepped by Lauren offered a virtual cooking demonstration focused on eating healthy and sustainably.

That’s a total of 8,025 total pounds diverted from the landfill. That impact equates to approximately an estimated:

The month ended with a tree planting to celebrate Arbor Day’s 150th Anniversary and the med center’s achievement of Tree Campus USA certification. A Ginkgo biloba tree was planted in the green space near 42nd and Farnam Streets.

Photo: A Ginkgo biloba tree was planted in the green space near 42nd and Farnam Streets to celebrate Arbor Day and the med center’s Tree Campus USA certification.